Star Trek returned to BBC1 on 6 April 1970, one week after the Easter Bank Holiday Monday, and ran weekly until 24 August. In an odd scheduling move the series then took a one week break for the August Bank Holiday on 31 August, returned for one more episode on 7 September, and then took another four week break before returning again on 7 October.

The block of episodes from 6 April to 7 September appears to have been promoted as "series two" of Star Trek. The 1969 "series one" of 25 episodes had slotted neatly between series six and seven of Doctor Who but now the two programmes would run concurrently. Doctor Who was back on Saturdays at 5.20pm and Star Trek was scheduled for 7.10pm on Monday. The later start time might be due to Star Trek drawing a more adult audience than expected, or it might be because the stories were a little more intense than appropriate for the original 5.15pm start time, or it could just be that the series was a ratings success and the BBC wanted to bring Star Trek back as soon as possible and the 50 minute Monday evening slot vacated by The Andy Williams show was ideal.

The episodes shown were a random selection of season one and two stories. It's possible these were originally intended to fill an uninterrupted 22 week block ending on the Bank Holiday Monday. "Series three" would then begin in October 1970 following the September break. The slightly disjointed end to "series two" came about because the August Bank Holiday Monday evening slot was given over to a live rock climbing event from Wales; The Anglesey Climb The Spider's Web. These live outside broadcasts from around Great Britain were an occasional feature in the late 60s and early 70s. The most famous was the 1967 three day climb of The Old Man of Hoy, and there would be another in 1971 The Glencoe Climb. These live outside broadcasts seem to have been the inspiration for the Monty Python's Flying Circus sketch Climbing the North Face of the Uxbridge Road.

In 1969 the successful Apollo 11 Moon landing had taken place between the first two episodes of Star Trek shown on BBC1. In an unfortunate echo of this the real life drama of Apollo 13 began on 14 April 1970 the day after The Enemy Within premièred.

Towards the end of "series two" the Radio Times interviewed Gene Roddenberry.  The interview was published in the 25 June 1970 edition and was accompanied by this fantastic piece of Frank Bellamy art. 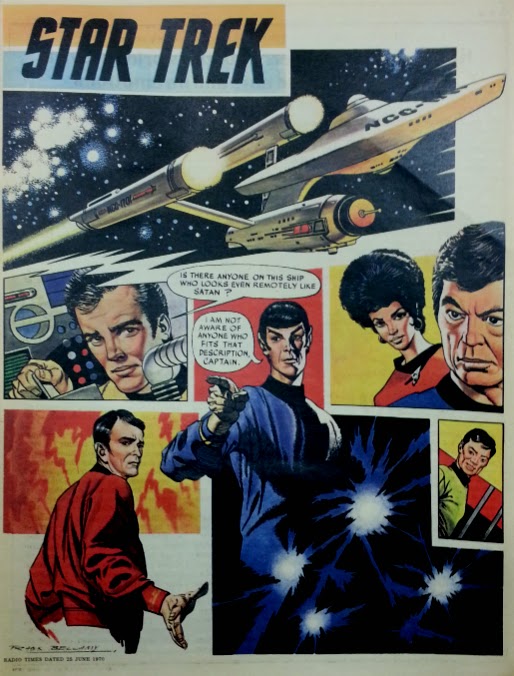 A "series three" of 16 episodes began on Wednesday 7 October 1970 and would continue until February 1971. The Ultimate Computer began this run and its broadcast was accompanied by a slightly confused Daily Mirror article which mixed up the BBC's invented "series three" with the actual last season three of Star Trek. In fact because of the way the BBC had divided up the stories they would be able to present a 14 episode "series four" in 1971. By the end of 1970 the BBC had showed all the episodes of season one and two, as well as a few from season three.

1) 1970-04-06. Court Martial was scheduled for broadcast on 1969-12-06 according to the BBC Genome site and The Daily Mirror, while Memory Alpha suggests The Alternative Factor. BBC Genome also lists Court Martial as starting the 1970 run of Star Trek. As do the Daily Mirror and the Daily Express. A repeat within the space of five months seems unlikely. The Daily Mirror listing specifically describes the 1970 broadcast as the start of a new series, as does the BBC Genome listing referring to "the new adventures of the Star Ship Enterprise." I think we can take this as confirmation that Court Martial was originally scheduled to be shown on 6 December 1969 but held back. A story in which Kirk must fight to keep control of the Enterprise might have been seen as a better hook to begin "series two."

3) 1970-06-15 and 1970-11-11. What's going on? According to the Radio Times Mirror, Mirror was scheduled twice on 15 June 1970 and then later in the year on 11 November. Memory Alpha opts for Mirror, Mirror on 15 June and The Doomsday Machine on 11 November. However this cannot be correct. One reason for consulting physical copies of the Radio Times themselves is they carry information not yet available online; like the great piece of Star Trek art by Frank Bellamy further up this page. The Radio Times letters page for the week 16 July 1970 carries a viewer's letter which refers to Star Trek being dropped for a World Cup replay. This replay can only be the notorious (if you're an England fan) 3-2 loss to West Germany (the team England had beaten 4-2 in 1966 to win the world cup) which took place on 14 June 1970. It looks as if Star Trek was cancelled for a repeat of that match. What a fun evening of television that must have been.

4) In the second half of 1970 several one off specials interrupt "series three" of  Star Trek.

1970-10-21 (19.20) Blackpool Tower Circus: An excerpt from the 1970 Show with The Svensons in their classical riding fantasy presenting a colourful Troika. Freddie Kenton and his beautiful partner, PETRONELLA, from Holland, in sophisticated juggling. David Rosaire with his family of perky pekes. Gerard Edon grace and electrifying thrills on the swinging trapeze. The Elwardos four young Danes hand-balancing on a staircase. Ruppert's Bears returning to Blackpool after a long engagement in Las Vegas. Charlie Cairoli with his son CHARLIE JUNIOR , his partner PAUL and the long suffering LITTLE JIMMY in trouble again - with the Circus plumbing. The Skating Sandras in the glittering water finale with The Tower Circusettes.

1970-10-28 (19.20) Remember, Remember... : Millions get innocent pleasure and amusement from firework displays, but we are still one of the few countries left that sells fireworks to children. The law says that they must be over 13 before they can buy - but those badly burned are frequently much younger. Every year fireworks are an annual hazard which injure and scar thousands of children.
Two years ago the Man Alive team reported on the cost, in human suffering, of Guy Fawkes night. Last year, when the programme was shown on BBC1, it caused an outcry. A National Campaign to Prevent Fireworks was formed. Others cried ' kill-joy ' - but 1,000 fewer children were injured. Moves were made in Parliament to change the law. But still nothing has been done. Tonight a programme introduced by DESMOND WILCOX examines the question afresh, investigates the need for safety, questions the law as it stands today, and asks-is the situation good enough?

1970-12-23 (18.35) Jesus: The story of His life through the eyes of the young generation Introduced by Kenneth More and featuring The Young Generation.
(19.20) Ace of Clubs: The Grand Final . Michael Aspel introduces a Gala Performance featuring artists competing in the Final of the 1970 Stage Awards from the City Varieties Theatre, Leeds. Of the 10 artists taking part, five will receive Golden Jesters, and the most outstanding act will be presented with the Bernard Delfont Special Award.

Posted by Sham Mountebank at 10:04 AM

Email ThisBlogThis!Share to TwitterShare to FacebookShare to Pinterest
Labels: Doctor Who, Star Trek: The Next Generation, The Daily Express, The Daily Mirror